January 21, 2018
City Police Station at Lajpat Nagar, Delhi... Time: 6.00 PM.  Devil's Hour , some would say... Michael, a man in his early 30s, was sitting silently in the Police Interrogation room, fuming from within as he waited for his lawyer to arrive. "I'm going to be dead. I shouldn't have trusted this idiot Shukla in the first place", he could be seen murmuring this all the time, walking across the room. He was brought in here today itself, under accusations of in total 5 murders and 3 double-murders in a row. Just a look at him and even the purest soul on the earth could see through his wrecked soul and know what he was up to. Quite interestingly, however, he hadn't even hesitated to accept his sins, once he was caught by the police, who had a rough time tracing him out. So finally, here he was, immensely quiet, sitting like the devil's own right hand, waiting to be served. It is perhaps rightly said, "Hell cannot be worse than it has already been". His
Post a comment
Read more

December 04, 2017
Even in an overly crowded nightclub, his eyes were stuck on a girl sitting in one of the corners. She wore a decent red gown with open black hair, sitting near the bar table with a glass of soft drink in her hand. Akash went to the bar and took a seat beside her. "One Magnum please." He ordered a drink for himself, although he wasn't looking at the waiter but at her only. "Hi", Akash greeted her informally. She didn't reply back but just gave an equally casual smile. "Can I buy you a drink?" Akash offered. "Well, to be honest, I would have ignored your invitation on any other day, despite being the highly functional sociopath that I am! But then, let's understand the reason behind your sudden approach towards a young, lonely lady sitting in a bar, shall we?" , said the mysterious girl in a flash. "To begin with, you seem likely to have gone through a series of monotonous piles of work all day... Oh, wait! The dark circles under
Post a comment
Read more

Our first and forever relationship with Life

December 06, 2016
"God gave us the gift of life, now we must give ourselves a gift of living it well"                                                              ~Voltaire We understand this, right? Have you ever had such a feeling that, given a chance, you would like to live your life in an unhealthy manner? Of course NOT . (the depressed and pained lot long for betterment and not further chaos) What then, is the reason which would account for a lot of people in our generation found to be cut off from the rest of the world? How come they suddenly begin to see the lack of sympathy there is for them and completely ignore the fact that there is so much yet to happen. I would like to point out few reasons which I feel are the nemesis of this kind of feeling :- a ) Being away from society: Just shying away at occasions where they need to have their say. b ) Not opening up to people: Remember, if you do not bare the wound to antiseptic, there is every chance it will cause a septic.
1 comment
Read more 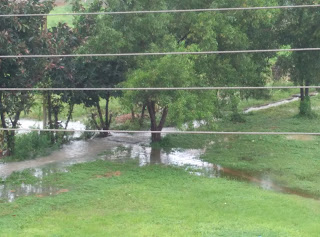 'Was raining,as I looked Outside, The only bliss in a not-so-happening day. I hope it would just stop,but then, It seemed as if it were a never-ending play... Full of puddles,the ground looked shy to reveal, But the drains did open up, Ah! they didn't conceal. Water,water everywhere, an inner voice said to me, "Someone;s Forgot to close all the taps in the sky, see?!" While I take a note of those lovely showers, My subconscious takes me to a different place. Far enough, that I can't keep up, With time and distance, And I lose all the trace... There's a farmer sitting, hands on his head, Looking plumb at the cloud, as well might be dead. He speaks in prayers and makes me think, Whose prayers are more important to be read?
Post a comment
Read more

July 18, 2016
It's strange, things which appear dormant to us, from within are for real, alive and running, And all that when we know, it's all as it seems, who would've thought the nature is this cunning?? The volcano boils and simmers from the inside, And doesn't yet flaunt its mighty rage, And it wouldn't take any logic to admit, That the wild,frantic sun we know,is the world's holy sage. A dead,leafless Oak in the autumn, knows, Cometh the spring, it will rejoice, Slaves of the war, chained to their destinies, when given a chance, sing harmonies in their full voice. Even a honeybee toils, for life on this earth, when all we could see that it could just fly, and a caterpillar ages old in its cocoon, we still just don't care when we see it, oh why?? The world has a theory of "Break,and get broken", But to try to change it, i wouldn't call it wise, It's what they'll probably teach you to do too, So, work hard in silence for what you aim to
2 comments
Read more

Life: on a different canvas

October 02, 2015
If i'm asked about the one thing we need to change the way we all lead our lives(most probably), then I say.. We must take a few risks. See, all our lives we keep looking for hope, help and anything and everything that we can count upon.. but most of the times we are put down by the ill fate..(which was somehow pre-determined) What more, any sense of opportunity becomes a reason for excitement and delight, which again may or mayn't be helpful at all in our course of action. A nd moreover, grasping the opportunity luck throws at us is a good option, but that way we surrender ourselves to the terms and conditions of the fate itself... Imagine signing a contract for a job on a blank sheet of paper... and that's even less fatal.. So, i say why not take a few jumps and think-out-of-the-box? Ok so what if god is believed to be responsible for all the good, is he not responsible for the bad? And if he is, then there must be something that probably we can do ourselves to get th
Post a comment
Read more
More posts